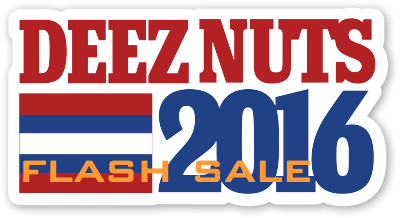 When Deez Nuts launched his official 2016 campaign, few took the 15-year-old seriously. Now that support has expanded across the country, supporters who are selling merchandise are now creating one-day flash sales. The biggest t-shirt discount for Deez Nuts was found to be more than 50% off the regular MSRP. The group of supporters that launched the campaign have designed that reducing the regular selling price could help someone to afford one.

The Federal Elections Commission oversees the filings and registrations of all new candidates in the U.S. Since Deez Nuts officially joined in July of 2015, there are over 500 additional candidates, compiled in a huge list, that can be explored. One of the reasons that so many people have entered the race is that people are just finding out that registrations are possible. In the past, some people were write-in candidates, but not officially on the ballot.

Due to the popularity of 2016 Deez Nuts merchandise, companies like BrainWarp.net have also picked up the story, and have taken the research to another level. By compiling a list of the best campaign merchandise, the company is expected to spread the word about other people who have entered the race in hopes to become the next President of the United States.