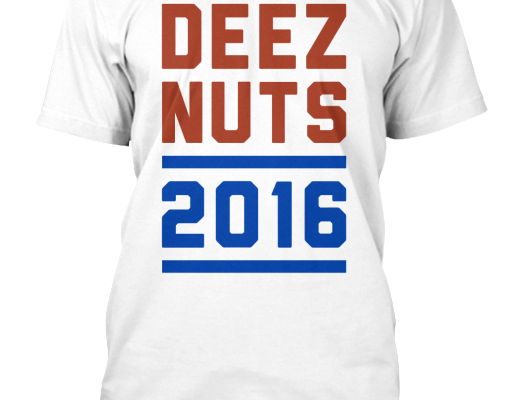 Deez Nuts is officially running for President of the United States in 2016. The FEC filing was made in time, and the race is now starting to heat up in several key swing states. A new 2016 Deez Nuts T-Shirt is now available to help raise awareness for the new candidate. The Daily Beast recently picked up the story and is continuing to monitor the daily polling numbers.

Deez Nuts the candidate is now poling at 15% favorability between 16 to 29 year-0lds in the United States. This number is expected to grow as support for this FEC Form2 filer goes viral. The TeeSpring page now setup to promote the 2016 Presidential Campaign of Deez Nuts should garner more interest for the 15-year-old Iowa Farm Boy who created the moniker.

There is no mention of the other hopefuls that are now on ballots in many states will also have an official t-shirt. The additional names on the ballots include: Sydneys Vuluptuous Buttocks, Kenny Rodeo, Eden, Ole’ Savior, Emperor Caesar, Buddy the Cat, Buddy the Elf, Jack Sparrow, James “Titus the Great” Law and Princess Oawlawolwaol.